This Grammar.com article is about New vs. Knew — enjoy your reading!

If two or more words sound the same when spoken out loud, but have different meanings, they are called homophones. Be careful not to confuse homophones with homographs, which also have different meanings but, instead, share a common spelling. Knew and new are two homophones that give many writers trouble. They are pronounced the same, since the K in knew is silent. Nonetheless, they mean different things, and are actually completely different parts of speech. If you have ever been confused about whether you really mean knew or new, you aren’t alone. This article will serve as a helpful guide for the appropriate situations in which to choose each of these words.

In this post, I will compare new vs. knew. I will use each word in an example sentence to illustrate its proper use and context. Plus, I will provide a mnemonic that you can use to help you decide whether you should use new or knew in your own writing.

New means something produced, introduced, or discovered recently or now for the first time; not existing before.

New also means something that is already existing but seen, experienced, or acquired recently or now for the first time.

She was flaunting her new bike.

Beginning anew and in a transformed way is also referred to as new.

She is thinking of starting a new life.

Knew is used as a verb in English language where it means to be aware of through observation, inquiry, or information. 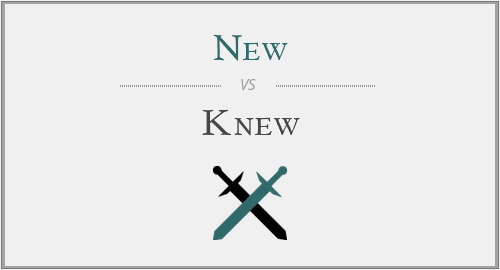 Most people in the conference already knew that CFCs can damage the ozone layer.

Knew also means to develop a relationship with (someone) through meeting and spending time with them; be familiar or friendly with.

He knew and respected Laura.

But those who knew her say she was not, as some have called her, a “recluse”; she did not eschew the company of others. (Time Magazine)

“There is no information that we are aware of that indicates she knew who the attacker was,” Sergeant Sim said. (The Sydney Morning Herald)

In Rome on Friday, Simone Farelli, a 34-year-old history teacher who was browsing for a new iPhone at an Apple Store, said she “didn’t see why” the company’s standoff with the Federal Bureau of Investigation “would change my mind about buying a new phone.” (The New York Times)

Liverpool new boy Marko Grujic has revealed he has received ‘more offers from girls’ since he signed for the Reds. (The Mirror)

In 1924, a year after founding the Turkish Republic on the ruins of the Ottoman Empire, Mustafa Kemal Atatürk, the country’s new leader, abolished the Ottoman Caliphate, which had been the last remaining Sunni Islamic Caliphate since 1517. (The New Yorker)

The words knew and new are homophones, which mean they sound alike but mean different things. It’s important not to mix them up because they are actually different parts of speech. New is an adjective that means unused. Knew is the past tense form of the verb know, which means to understand or to be aware of. If you are having trouble using these words correctly, remember that knew is a verb and has to do with knowledge. Since both of these words start with the same two letters, you can link them together in your mind.