No One vs. Noone

This Grammar.com article is about No One vs. Noone — enjoy your reading!

Have you ever wondered why some pairs of words are shortened into a single word, but not other pairs? To make matters even more confusing, sometimes the pairs are used differently than in their shortened form (for example, log in and login). It can be tempting to shorten pairs of words—even when to do so would be grammatically incorrect. Many writers try to shorten the words no one into a single word, to form noone. If you’re having trouble deciding to use no one or noone, read on.

How do you spell no one? In this article, I’ll compare noone vs. no one, and I will use the correct form in a few examples sentences. Plus, at the end, I will show you a helpful trick to remember which is which.

No one as pronoun:

No one is used as a pronoun in English language where it means no person; not a single person.

No one came to her extravagant party.

No one can also be employed with an additional noun, where one ascribes singularity to the noun and no inverts it. This is something of a specialized usage, and could be considered ornate.

It was said that no one warrior could defeat him in hand to hand combat.

No one on board was seriously hurt, but authorities were concerned about the wellbeing of the whale. [Sydney Morning Herald] 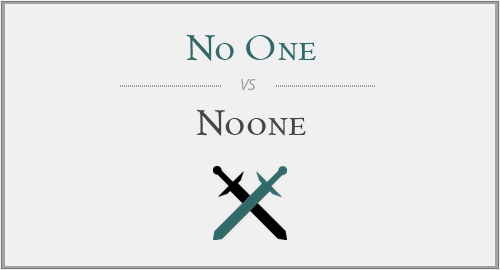 It’s a sad thing when no one loves you, most of all if you are a new vehicle being shunned by the buying public. [Globe and Mail]

But the fact that these companies lack an IT department does not mean there is no one looking after technology. [Financial Times]

President Obama meets with Senate leaders, but no one wants to back away from tough stances on taxes. [Los Angeles Times]

No one cannot be shortened to a single word. It must always appear as two words. Noone is an error, even though many similar constructions exist in English, like any one and anyone, every one and everyone, and some one and someone. No one cannot be combined into noone by extension of the same rule. The reason being, among others, the double O is clumsy, as it approximates the double vowel oo, which is a separate phoneme in English. In other words, noone looks like it should be pronounced like noon. Since that’s not the case, it’s better to leave this term separated into two words.

No one or noone:

No one seems like it should be able to be combined into the word noone, such as is the case for any one and anyone. However, noone is not a word. No one is the only correct version of this phrase. Noone is a spelling error. You can remember this distinction by using the phrase “noon is a time of day, not an absence of people.” If you’re still having trouble remembering the difference, you can refer back to this article for a quick refresher.