This Grammar.com article is about Obligated vs. Obliged — enjoy your reading!

Obliged" is an old word in the English vocabulary, originating from the verb "to oblige", used to express the past tense or past participle of the initial action of forcing somebody to do something. "Obligated", on the other hand, is built as a regular past-tense/past participle form for the verb "to obligate", which is a modern version that appeared later to express the same meaning.

So which version is more commonly used nowadays? Are they both correct? What should you know before using "obligated" and "obliged" correctly in a sentence, to make sure you are not wrong?

Even though the popularity of using "obligated" has been gradually growing during the last years, especially in the US, "obliged" is still used more often in both British and American English. Even so, the fact that they mean the same is also real and will, therefore, allow you to use them in any context.

When do we use "obligated"?

You can use it whenever you wish to express the meaning of the verb "to obligate", "to force", in the past tense or in its participle form:

Example: The law obligated the food chain to shut down their activity. - expressing the action of obligating someone to do something.

When do we use "obliged"?

Also used for the same purpose as "obligated", you can use "obliged" in all contexts mentioned above, with no restriction. In addition, "obliged" also carries a formal, old-fashioned signification, referring to feeling pleased, sincerely thankful for something.

Example: Thank you so much for your help, I feel much obliged.

Both versions, "obligated" and "obliged", are correct at the present moment. There is no doubt, anyway, that "obliged" is still much preferred and more often used in official communications. 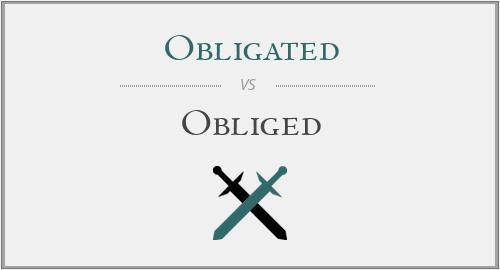