This Grammar.com article is about Obtain vs. Attain — enjoy your reading!

With “obtain” and “attain”, confusions or doubts are not about their spellings. It’s quite easy to distinguish these verbs, as they are distinct from every point of view. Still, the pair of words is a great example of common confusion and misunderstanding in English, because people are often not sure about which word is more appropriate to use in a certain context; or they are sure they are using them correctly, when they’re actually not.

“Obtain” and “attain” have nothing identical in their pronunciations or written forms, but a lot of similarities regarding their meanings. This makes them confusing. Still, there are some subtle differences that require them to be used with certain contexts. Check them below and clear away any doubts regarding this pair of words.

The most usual doubt when it comes to using “obtain” or “attain” appears when people ask whether they “obtain” a degree, a diploma, a promotion or any other achievement, or they actually “attain” it. Both words refer to “getting” something, but the way that thing gets into one’s possession requires the use of “obtain” or “attain”.

A second important misconception is about “obtain”. The verb tends to be used more commonly than it should, in informal conversations, with a wrong meaning. We are going to explain these subtle differences and meanings with conclusive examples below.

When do we use “obtain”?

The verb “obtain” is most commonly used wrongly, because people tend to believe that it is a perfect synonym for “get”, for “getting into the possession of something”, in any context. But it’s actually not an informal word used with this meaning. According to Cambridge Learner’s Dictionary, for example, “obtain” is a formal verb, defined as “getting something” such as permission or University degree. In usual conversations, it’s more recommended to use “get” than “obtain”. In formal ones, anyway, “obtain” suits better.

Example: I wish I could obtain the permission to work with the CEO for this project. – “obtain” is used in formal messages, referring to getting something (usually permission, a degree, a document etc.)

When do we use “attain”?

Example: I am working out every day and I am eager to attain a high level of fitness. – “attain” refers to achieving something after a lot of work.

To resume everything shortly, “obtain” is about getting something, but it’s a word preferred in formal contexts rather than informal conversations; “attain” is about achieving something after a lot of work for that. So even though both verbs refer to getting into the possession of something, keep in mind these subtle differences to use them perfectly in your communications. 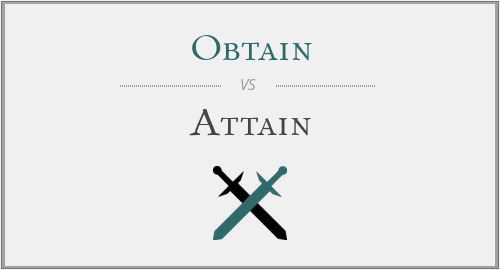