Clarifying any misunderstandings is our top priority here, at Grammar.com. We want to make sure that we prepare the best explanations for the most confusing sets of words. This is certainly the case for "odd vs. odds", which can be misleading due to the coincidental similarity of the words.

So, as mentioned previously , "odd" is not a noun, but an adjective. It's not used to define an object, but to describe something. And, as a result, "odds" can never be the plural form of "odds". In fact, "odds" is the word of the two that can be a noun, a noun that always has a plural form.

"Odd" can only be used as an adjective, and it has several different meanings. Firstly, it describes something strange or unusual. Secondly, it can be a shorter word for "not happening often", and in this case it is always positioned before a noun.

It can also be used as a synonym for "separate", "alone", "only one" when referring to an object that is part of a pair and the other part is missing - and, in this case, it is also always used only before a noun; or as a synonym for "approximately". Nonetheless, as you may already know, "odd" can refer to a number that, divided by two, does not produce a whole number.

Example 1: He always felt that there was something odd about this place. - "odd" can mean "strange".

Example 2: She does odd jobs every now and then. - "odd" is used to describe something not happening often.

Example 3: There's an odd glove, can you find its pair? - "odd" refers to a component of a pair separate from the missing other. 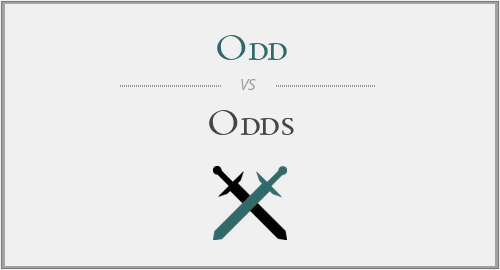 Example 4: There are 50 odd students in the classroom. - "odd" can also be synonym for "approximately".

Example 5: Five is an odd number. - "odd" is the property of numbers that don't give a whole result when divided by 2.

If you feel that "odd" is a little complex or even overwhelming, you'll also feel relieved that "odds" is a lot more simpler. The word is always a noun, defining a single concept. It refers to the probability that something will happen.

Example: I have no idea about what the odds are that you will win this contest. - "odds" defines the probability for something to happen.

The most essential thing to remember regarding "odd vs. odds" is that the words aren't related, and that by no means is "odds" the plural form for "odd". "Odd" is an adjective with multiple meanings, used to describe certain things, whereas "odds" is a noun that always appears in plural form and refers to the probability that something will happen.