This Grammar.com article is about Overdo vs. Overdue — enjoy your reading!

Ram is advised by his doctor not to overdo bicep exercises because of his fractured arm.

Financial experts believe another recession is inevitable, perhaps even overdue.

Though very commonly used, overdo and overdue still are sometimes confusing for young writers and learners of English language due to their remarkable resemblance with each other. The words which resemble each other like this are called homophones and they are mostly mistaken for each other making a lot of errors in a simple piece of writing,

This article will throw light on the meanings, usage and examples of both overdue and overdo so you never mix them up again and scorer an A on your English test.

The word over do is a combination of two words of English language; over and do. It originated form Old English oferdōn.

Overdo is used as a verb in English language where it has several meanings. It means to do, use, or carry to excess; exaggerate.

She rather overdoes the early cockney scenes.

Overdo also implies the meaning of exhausting oneself by overwork or overexertion.

I'd simply overdone it in the gym. 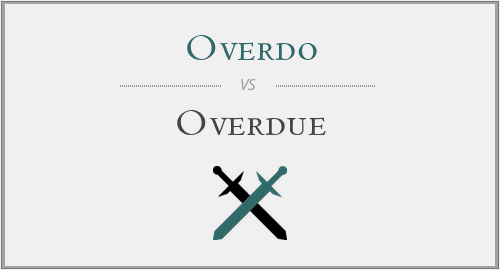 Overdue is used as an adjective in English language where it describes the noun as not having arrived, happened, or been done by the expected time.

When a woman does not have had a menstrual period at the expected time, she is overdue.

I was already a week-and-a-half overdue.

Something is overdue if it has been needed for some time.

To overdo something is to do it to excess. For example, if you overdo the eating of ice cream, you might get a stomachache. The word is only a verb. Overdue is only an adjective. It means undelivered or unpaid when due. If you fail to turn in an assignment at the deadline, it becomes overdue.