This Grammar.com article is about Pretence vs. Pretense — enjoy your reading!

This not very common word is often confused for its alternative half making it difficult for young writers to make a decision on what the right spellings of the word are. Consider the following sentences:

It became obvious that his theories were nothing but pretense.

They entered the country under the pretense of being journalists.

Do you believe that one or both of the sentence should have had the other spellings of presence i.e. pretence? If you do so, keep reading and you will find all the answers you are looking for regarding the two spellings of the word and what is difference between the two.

The first and the foremost thing to know is that both the spellings are correct and acceptable all over the world. The differences arise due to changes in American English which started in 19th century and lead to all the chaos.

Pretence is used as a noun in English language where it means an attempt to make something that is not the case appear true.

His anger is masked by a pretence that all is well.

A false display of feelings, attitudes, or intentions is also called pretence.

He asked me questions without any pretence at politeness.

Pretence is used in the sense of practicing the invention of imaginary situations in play or affected and ostentatious speech and behavior.

They have always avoided preciousness and pretence.

A claim to have a particular skill or quality is sometimes referred to as pretence too. 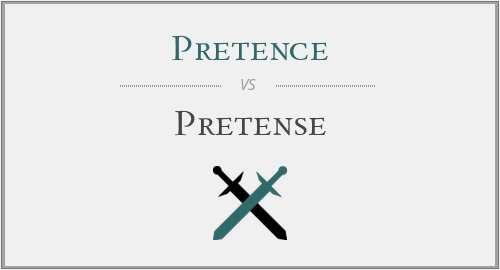 He was quick to disclaim any pretence to superiority.

Pretence and pretense are different spellings of the same word. Pretense is preferred in American English, while pretence is the preferred spelling in most other varieties of English, including British and Australian English. Canadian English generally favors pretence over pretense, but the latter appears about a third of the time.

Senior year of high school we once convinced our parents to get us out of school for a day under the pretense that we were sick. [Wall Street Journal]

The president chose to drop any pretense that his administration supports the marriage act. [New York Times]

I met him in a swank and strenuously hip Midtown hotel, a place totally at odds with his lack of pretense. [Sports Illustrated]

The Egyptian government reopened the pyramids to tourists on the pretence that things were getting back to normal. [BBC News]

She will carry on this pretence, she decides, for the rest of the day. [Sydney Morning Herald]

The pretence is that we are in a high school gym watching a competitive spelling bee. [Guardian]