In this Grammar.com article you will learn the differences between Principal and Principle.

Our principal made it compulsory to follow all school principles.

Principal and principle are a pair of words that are called homophone, meaning they have same pronunciation but very different meanings and spellings. It is very common for readers and writers to confuse these two words, using one in the place of the others. Consider the sentences below:

The principle aim of the initiative is to make art accessible to everyone.

There are too many designers who do not understand the basic principals of design.

What do you think of these two sentences? Are the words principle and principal used correctly in the first and second sentence respectively?

The obvious answer is no, but, it is alright if you were unable to detect the wrong usage of this pair of words, after all that is why we are here. This article will brief you about the differences in the meanings of both the words along with their usage by using everyday examples.

Principle with an e, is used as a noun in English language where it represents a fundamental truth or proposition that serves as the foundation for a system of belief or behavior or for a chain of reasoning. He ignored all basic principles of justice while making his statement. Principle also means a rule or belief governing one's behavior. Sara is struggling to be faithful to her own principles. The morally correct and fair attitude of a person is also called principle.

He is a man of principle.

Principle can some time also refer to a general scientific theorem or law that has numerous special applications across a wide field. My engineering design will operate on the same general principle of motion. Another important and widely used meaning of principle is a fundamental source or basis of something.

The first principle of everything in the universe is water.

Originated from Latin word principalis meaning ‘first’ or ‘original’, principal with an a is used as an adjective as well as a noun in English language. As an adjective, it describes a noun that is first in importance or main. The principal cities of America is New York. It also sometimes is used for describing or denoting an original sum that is invested or lent.

The principal amount of your investment is lost. 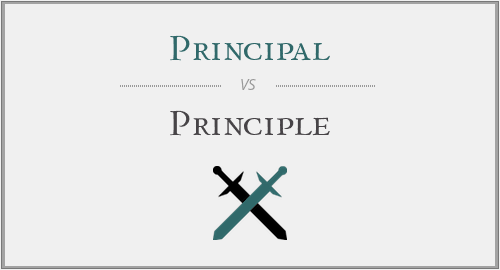 As a noun, principal represents the most important and senior person in an organization, group or firm. My consultancy’s principal is based in San Francisco. The head of a school, college, or other educational institution is the principal. I was appointed principal of the new school. Principal is also a senior civil servant in charge of a particular section in UK. The leading performer in a concert, play, ballet, or opera is also called the principal.

The principals stunned everyone with their amazing performance.

The principal is a person for whom another acts as an agent or representative. Stockbrokers in Tokyo act as agents rather than as principals. The person directly responsible for a crime is known as the principal. An organ stop sounding a main register of open flue pipes typically an octave above the diapason is called principal.

All the principals are on one manual.

The two words, although very similar in sound and almost similar in spellings, except for the e and a, are very different in meanings which you must know about till now. The main point of this article is for you to recognize the difference and remember it for future times. A small tip for you is to know that your principal is your pal (as in your friend). So whenever you see the principal with a ‘pal’ at the end, know that he/she is the person at the highest rank in an institution. However, principle without a pal is a rule or belief that people follow.

So tell us, “Is your principal a man of principle?”