This Grammar.com article is about Program vs. Programme — enjoy your reading!

You may notice a doubled consonant and an extra –e at the end of many words, depending on the source of the material you are reading. That extra letter is an example of spelling conventions in British English. American writers omit that letter combination from the end of some words, when the preceding letters are a short vowel followed by a consonant at the end of a word. Programme and program illustrate this concept. While it might be tempting to dismiss the former as British and the latter as American, there is an important exception for one usage case.

Program originated from early 17th century (in the sense ‘written notice’): via late Latin from Greek programma, from prographein ‘write publicly’, from pro ‘before’ + graphein ‘write’.

Program is used as a noun in English language where it means a planned series of future events or performances.

She is attending the weekly program of films at our house.

A sheet or booklet giving details of items or performers at an event or performance is also called a program.

We went to see a theatre program.

Program is also an item broadcast between stated times on radio or television.

Program is also used as a verb in English where it means to provide (a computer or other machine) with coded instructions for the automatic performance of a task.

It is a simple matter to program the computer to recognize such symbols.

To arrange according to a plan or schedule is also called to program. 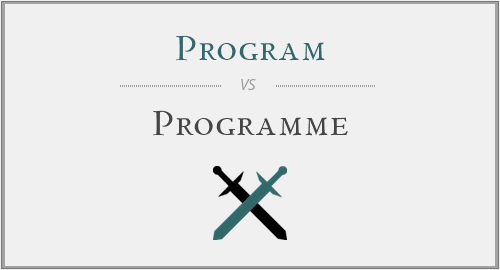 We learn how to program our own lives.

Unemployed Scots taking part in newly devolved, voluntary work programmes will not face sanctions, after the Scottish government won its battle with Westminster to exempt those taking part from having their benefits stopped or reduced. (The Guardian)

The American spellings of the word omits the last –me and makes it easier to pronounce and understand. Program is used when you are an American or are writing for American audience.

The program is being financed by a $10 million donation from Jon Gray, the global head of real estate at the investment firm Blackstone Group, and Mr. Gray’s wife, Mindy. (The New York Times)

Program and programme are different spellings of the same word, reflecting differences in spelling conventions between American and British English. Both words are suitable for many contexts, and are interchangeable with the exception of computer software, when program is the standard variant across the world. To help you remember this difference, notice that programme ends with an E, the same letter that begins the word England. This shared letter is a useful way to remember that programme is standard where British English conventions hold sway.

Are you a programmer?