This Grammar.com article is about Subjective vs. Objective — enjoy your reading! 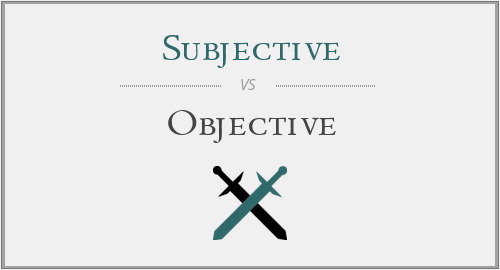 Statements that are facts based on evidence and opinions taken from valued judgments need to be differentiated in today’s extremely practical life. To differentiate such statements two terms; subjective and objective are used. In this article, I will illustrate with examples the words’ multiple uses as well as their grammatical use.

The word subjective acts as an adjective in English language where it refers to something affected by personal feelings or ideas.

His views on feminism are highly subjective.

In the English language, the word objective is used as an adjective and it means that something is judged on the merits and facts available rather than one’s own personal ideas and values.

Historians try to be objective and impartial all the time.

Objective also acts like a noun sometimes when it means a goal.


The previous government was unable to achieve its objective.

The case was dismissed by the judge because of his subjective views about the victim.
Above is a wrong illustration as judges, detectives and people involved in important decision making cannot base their decisions on just subjectivity, their personal feelings, and hence need some evidence and facts to back their decisions.
If I ask both my parents about which house to buy, I will probably get two different subjective answers.
Allison, a New York Journalist, tried her best to be objective and not let her opinion affect her report.
I want an objective review of our company’s financial report for this year by tomorrow.

Both the words are used usually as adjectives and nouns, both in the English language and as an adjective, they are used to refer to unprejudiced and prejudiced decisions. Remember, objective means something is based on facts and since both words, objective and fact,contain the alphabet ‘C’, you can easily now remember the usage of both words.