This Grammar.com article is about Throws vs. Throes — enjoy your reading!

The words throes and throws are homophones: they sound alike but have different meanings. The plural noun throes means a great struggle or a condition of agonizing pain or trouble. The idiom in the throes of means in the midst of some painful or difficult experience. Throws is the third-person present singular form of the verb throw--to toss, hurl, or discharge. Consider the sentences below:

In the late 1970s, Uganda was in the throes of economic collapse, and there were long lines in Kampala for even the most basic goods.

A young lady appears at the window and throws kisses to the crowd.

The word throw originated from Old English thrāwan ‘to twist, turn’, of West Germanic origin; related to Dutch draaien and German drehen, from an Indo-European root shared by Latin terere ‘to rub’, Greek teirein ‘wear out’. Sense 1 of the verb, expressing propulsion and sudden action, dates from Middle English.

The third person use of the verb throw is throws which means to propel (something) with force through the air by a movement of the arm and hand.

She always throws a brick through the window when asked about her whereabouts.

Throw also means to send suddenly into a particular state or condition.

He throws all her emotions into turmoil.

Give or hold (a party) is also referred to as throw.

My neighbor always throws a grand party at every 4th of July.

Throes is used as a noun in English language which means intense or violent pain and struggle, especially accompanying birth, death, or great change. 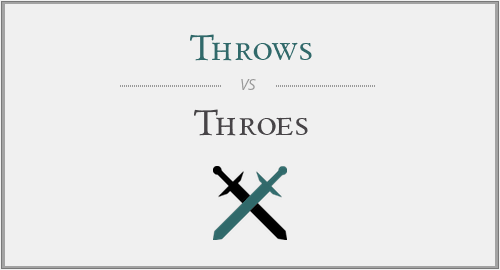 He convulsed in his death throes.

The European monster is in its death throes (The Telegraph)

And while the resistance may be symptomatic of death throes, a rage at the dying of the white male light, it nonetheless presents a very real threat — there is the possibility that the old and angry may triumph over the new and different. (The Huffington Post)

“Physical states of abandon when drunk or in the throes of passion seem synonymous, and that comparison entered into the forefront of my paintings.” (The Chicago Tribune)

In the throes of flu season, doctors remind public of ‘flu etiquette’ (The Midland Reporter-Telegram)

Kelsey Mitchell hit six free throws in the final 1:14 to help the Ohio State women’s basketball team rally past Michigan State 85-80 in the Big Ten opener for both teams on Thursday.  (The Columbus Dispatch)

No scaredy cat: Moggy filmed ATTACKING a horse which bolts and throws its rider… before dog comes to rescue and chases off the feisty furball (The Daily Mail)

Prewitt made two free throws with 1:09 remaining to pull within 68-65 but Towson made 8 of 10 free throws to seal it. (The Daily JOurnal)