This Grammar.com article is about Travelled vs. Traveled — enjoy your reading!

Lee travelled to the Middle East during vacations.

Or had she traveled?

Travel, a simple and common word of English, when used in its derivative forms can be written in two ways; with a single l or with two ls. This can be seen in traveled and travelled, traveling and travelling and traveler. These variations in the spellings arose due to differences in American English and British English and often result in confusion among writers.

These differences are openly discussed in this article where origin, meanings, usage and examples are used to clear out these confusions.

The word travel originated from Middle English: a variant of travail, and originally in the same sense.

Travel is used as a verb in English language where it means to make a journey, typically of some length.

The vessel had been travelling from Libya to Ireland.

To journey along (a road) or through (a region) and to withstand a journey without illness or impairment is also called travel.

He usually travels well, but he did get a bit upset on a very rough crossing.

Travel is also used to describe the task of being successful away from the place of origin.

Travel is used to imply the meaning of (of an object or radiation) movement, typically in a constant or predictable way. 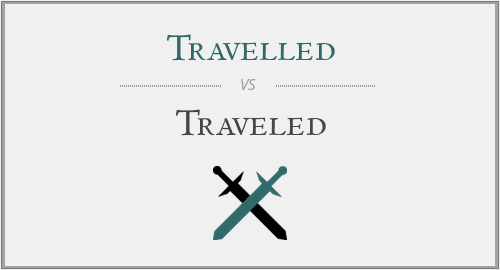 The action of travelling is called travel as noun.

My job involves a lot of travel.

Something that is (of a device) sufficiently compact for use on a journey is called travel.

She packed a travel iron along with other things.

Travelling and traveling are the two spellings of the same word. Both of these spellings are acceptable and exchangeable in English language but their usage differ according to the part of the world they are spoken in. In American English, the inflected forms of travel take one l—so, traveled, traveling, traveler, etc. In varieties of English from outside the U.S., these forms take two l’s—travelled, travelling, traveller, etc.

On average, it traveled 4 to 5 miles an hour. [Los Angeles Times]

Morgan claimed the French vessel has been towing at 4 nautical miles, whereas the tugs could have traveled at 6 to 7 nautical miles. [Newsday (dead link)]

But perhaps the most logical of all explanations is that Romney is a time traveler. [Washington Post]