This Grammar.com article is about Vicious vs. Viscous — enjoy your reading!

The Government targeted the vicious cycle of poverty.

The viscous fluid passing through the pipe entered the room.

The words vicious and viscous, though not homophones, have extremely similar spellings and thus are often mistaken for each other by many writers and readers alike. Consider the above two sentences and see if you can deduce their meanings from them.

This article will explain everything about the two words along with their meanings and examples.

Vicious originated from Middle English (in the sense ‘characterized by immorality’): from Old French vicious or Latin vitiosus, from vitium ‘vice’.

Vicious is used as an adjective in English language which means deliberately cruel or violent. It has synonyms like brutal, ferocious, savage, violent, dangerous, ruthless or remorseless etc.

I witnessed a vicious assault.

Vicious also means (of an animal) wild and dangerous to people.

The dog was vicious and likely to bite.

Something that is serious or dangerous is also called vicious.

Something that is immoral is also sometimes referred to as vicious. 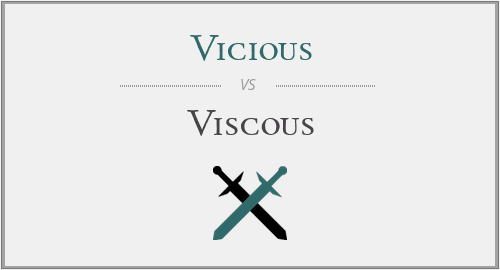 Every soul on earth, virtuous or vicious, shall perish.

The word viscous is also used as an adjective in English language and means having a thick, sticky consistency between solid and liquid; having a high viscosity. It has synonyms like sticky, gummy, glue-like, gluey, adhesive, tacky, adhering and adherent etc.

The viscous lava erupted from the mountain.

Gallons of the viscous amber fluid have been given to politicians and journalists, as the apiarists of Australia lobby for action against the imminent incursion of Asian bees. [Sydney Morning Herald]

The thick and heavy bitumen, sometimes called tar or tar sands, is too viscous for traditional pipeline transportation. [The Cherokeean Herald]

Once there, it will reduce the viscosity of the thick crude oil residing in the well and allow for easy extraction. [Inhabitat]

An ordinance providing for the regulation of vicious and potentially dangerous dogs was introduced on first reading by the township committee this week. [NJ.com]

I defend their right to be vicious and I don’t take it personally anymore, because I see literary viciousness as a dark art that sometimes needs writers as its canvas. [The Guardian]

Inquiring minds want to know the difference between vicious and viscous. Although these adjectives look similar — both beginning with vi, ending with us, and having a jumble of vowels in the middle mixed in with the letter c — they actually have no relationship at all beyond the fact that both come from Latin roots. Viscous, Webster's tells us, comes from the Latin for "full of birdlime." Although we're more likely to curse as we wipe sticky tree sap from our windshields, rather than think of it as a useful adjunct to hunting small birds for dinner, the stuff had much the same reputation in Roman times as it does now: gummy and hard to wipe away. Viscous, by extension, means thick and gluey. Vicious, on the other hand, is from the same Latin root as vice. It has a number of negative meanings, the most familiar of which is currently "dangerously aggressive" or "marked by violence or ferocity".