I have heard a lot of people using ability and capability interchangeably and rightly so as both words are treated as synonyms. However, there are subtle differences between both and in this Grammar.com article, we will clear this difference with suitable examples.

Ability to do some task means that you can do it and have done it in the past. Ability determines a person’s skill or level of expertise. In other words, it denotes the quality of being able to perform something. For example,

• She has the ability to grasp concepts very fast.

• Her ability to read 50 words per minute fetched her many awards in school.

• He has the ability to persuade everyone to make things work his way.

• My friend has the ability to concoct stories and hide stuff from everyone.

Ability is also used as a suffix – probability, suitability, disability, usability, stability etc… These are nouns of the adjectives like probable, suitable, usable etc…

Even capability comes from capable + ability 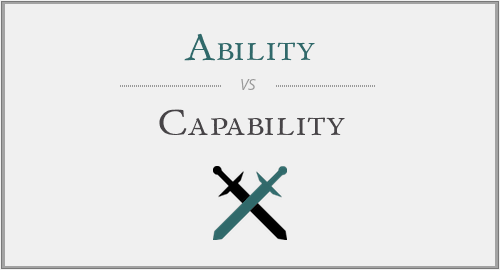 • He has the capability to win the cup, but he is not trying enough.

• You have the capability to complete this whole round in less than 2 minutes; you just have to push yourself a little more.

• The questions were beyond the capability of most five-year-old kids.

• If you change your thinking, you have the capability to change this world.

• Never underestimate the capabilities of a woman.

• You can do much more than you think you are capable of.

Ability and capability both are nouns. Ability has its roots from the Latin word abilitas.

Able and capable, the adjective forms of these nouns also have the same differences -

"Currently, I will be able to take up only two subjects, though I think I am capable of taking up upto 5 subjects per semester."