Adapt vs. Adept vs. Apt vs. Adopt

The list of similar words keeps going on and we are slowly becoming adept at adapting ourselves to aptly &amp; identify these words thereby adopting new learning skills. In this Grammar.com article, let us understand each word and its usage in detail.

Apt is an adjective that describes the right situation for something or the person who is perfectly suitable for some situation. Apt can also be used to describe someone who is quick to learn. Apt sis derived from the Latin word aptere (fasten) -> aptus (fit) leading to apt meaning suited or appropriate.

No points for guessing that aptly (used in the intro paragraph) is the adverb form. The antonym of apt is inapt which means inappropriate.

•  This is the apt situation for us to go and ask for money.

•  The ambience couldn’t have been more apt.

•  We gave the same task to 4 people and she proved to be the aptest person for the project.

Although the comparative and superlative degrees for apt are apter and aptest, it is not wrong to use more apt and most apt as well.

Note – Sometimes, the word ‘apt’ is used as a short form for apartment. For example, ‘Call us to know more about this apt.’. Here apt is a noun.

Adapt is a verb that means to adjust to a situation or modify something for new purpose or condition.

•  We thought that my parents will find the new place very different, but they adapted quite well.

•  To be in this job, you have to be flexible and adapt yourself to different situations.

•  The movie was adapted from the short story written by an Indian author.

•  Software companies are adapting their data systems to cloud solutions.

•  Listen, we have to adapt our schedule to accommodate the new roommate.

The word originated from the Latin word ad (to) + aptus (fit) which later came on to become adapt.

Adopt is a verb and is used in different contexts.

To adopt a child/pet is to take custody of someone else’s child and raise them as one’s own. 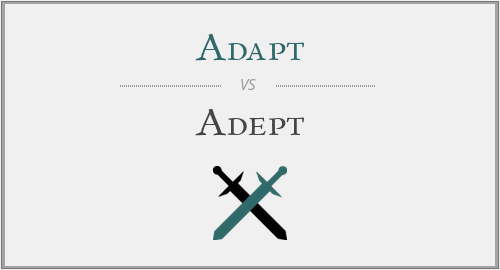 •  We applied for adoption a year back and our letter got approved only 2 months back.

•  They adopted a poodle, isn’t that cute?

•  It is nice of you to have thought of adopting 2 children from our orphanage.

To adopt something (an approach, a course, an idea) is to take it up or follow it.

•  I adopted the first approach as it sounded easier than the other two.

•  He was the first one to adopt this practice in his department.

•  She was about to adopt for the college when their license got cancelled.

•  We decided to adopt the proposal after a vote of majority.

•  She adopted a sympathetic tone after she came to know about her employee’s loss.

Adopt has its roots way back to the late 15th century from the Latin words ad (to) + optare (choose) or adoptare meaning to choose.

Adept is an adjective describing a person who is proficient in something. You could be adept at giving formal speeches, or quickly proof-reading a bunch of text. Adept is also used as a noun. Adept has been derived from the Latin adipisci meaning obtain or attain.

Adept at or adept in?

Most users get confused between ‘adept at’ and ‘adept in’. While both are correct in their own usage, adept at is used more often than in. If you are confused, stick with ‘adept at’.

•  She is adept at playing carrom.

•  Adept at stitching, she opened her own tailoring shop and was able to expand her business within 3 months.

•  You have to be adept in oral and written communication to get this job.

•  She adeptly handled the situation by talking to the manager.