Some concepts in English are clearer than others, and some are more clear when told in a different manner. Isn’t it? While Microsoft word doesn’t like the word ‘more clear’ and doesn’t accept it without the blue lines, it is perfectly fine to use ‘more clear’ in some contexts. In this grammar.com article, let us see how both clearer and more clear make sense and can be used for perfectly valid sentences.

When something is understandable or transparent, we say it is clear. Some examples would be – ‘The water is crystal clear’¸ The concept is ‘clear’.

Clearer, clearly is the comparative degree made in a similar manner as many other adjectives that end with -er and -est in comparative and superlative forms. For example, thicker, weaker, sharper, colder, darker etc…

In general, words with one syllable use -er to form comparatives. Thus, clearer is a natural comparative choice for clear. Examples –

There are some words that aren’t satisfied just by adding -er to make comparatives. They want something ‘more’. These are the words with multisyllables. For example, more beautiful, more horrible, more careful etc…

Even though clear has only one syllable, the word ‘more clear’ is in usage for a long time now, and though we don’t know how it came into existence, as of today, it is perfectly valid. You can always replace clearer in all the above examples with more clear.

You may not be totally convinced with this replacement, but it is grammatically correct. Also, even if you are not fully satisfied, read the second example, you might feel much better. In the second example, the usage of ‘more clear’ looks perfectly appropriate. This could be because the sentence has a more formal tone.

Which means, apart from the fact that usage of clearer or more clear is a personal choice, we can use ‘more clear’ for formal sentence structures. Examples –

Clearly, because of the -ly, becomes an adverb. Adding more before clearly, can be correct in some contexts, but not all. Example –

Here, both the sentences are correct.

Clearer is already a comparative form, more is also used for comparative. It is meaningless to use two comparatives at the same time. Hence, it is incorrect to say “more clearer”.


Clearly, clearer is more clear in terms of the natural choice based on the syllable rule of grammar. However, we can use ‘more clear’ as well, especially for formal tones or talks, which is perfectly fine! 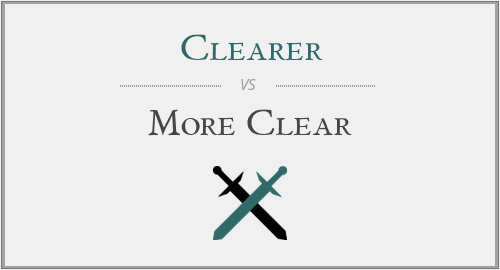