"Dealer" is obviously a word that originates from the word “deal" - there is no doubt about that. But what is the difference in these words’ meanings and what particular meaning does each of these words carry? Let's thoroughly discuss "deal vs. dealer" and clarify once and for all how to use them accurately in your English phrases.

The word "dealer" dealer holds the same suffix “er” as "worker", "painter" or "cooker". If you understand these, there won't be any difficulty in understanding how "dealer" is formed from the word "deal". Adding the suffix "-er" to nouns or verbs allows the formation of new words through a process called derivation. This is a great method of enriching the vocabulary of many languages, of which English. is one of them. Therefore, not only does "dealer" originate from the word "deal", they are also part of the same grammatical family, which means that their meanings are quite closely connected.

Even so, there are some subtle differences in the meanings of these words that require their use in different contexts, and which don't allow confusions. They are not synonyms and therefore, each word carries its own significance. Check all the meanings of the words "deal" and "dealer", along with clear examples of sentences containing them, in the following sections.

"Deal" can be used both as a noun and as a verb in sentences and phrases. When it appears as noun, the word defines an agreement or an arrangement which is closed especially in a business context. But it can also refer to the price paid for something and the quality or value received in exchange for money.

As a verb, "deal" has two primary meanings. Firstly, it defines the action of giving cards to players in a game. And, secondly, it means talking, being or discussing  a particular subject.

Finally, "deal" is also a verb used in certain constructions, mainly "deal with somebody/something" or "deal in something". The former means taking action in order to solve a problem or doing business with certain people or organizations; the latter refers to buying and selling particular products, as a business.

Example 1: We came up with an amazing deal that our partners already accepted. - as a noun, "deal" refers to an arrangement, especially in the context of a business agreement.

Example 2: I made a great deal for my new car. - "deal" can also refer to the price paid for something and the value received in exchanged for the money paid.

Example 3: We can start playing as soon as I deal the cards. - used as a verb, to "deal" means to distribute the cards to players of a game. 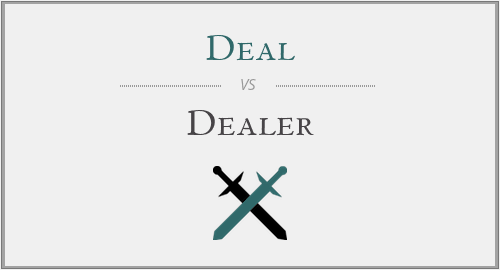 Example 4: The program we are working on will deal with teenage depression. - "deal" can also refer to managing a particular subject.

Example 6: All our businesses deal in rare products. - to "deal in something" refers to buying and selling particular products as a business.

When do we use "dealer"?

As already explained when we talked about derivation, "dealer" is the noun created from the word "deal", and it always functions as a noun in any phrase or sentence. It can either define the person or company that buys and sells things for profit, or it can refer to the person whose job is to distribute the cards to players in a game.

Example 1: We need to find a car dealer to represent us in front of the clients. - "dealer" defines the person or company that buys and sells things for profit.

Example 2: We are waiting for the dealer to give us our cards and start playing. - "dealer" may also be the name of the person whose job it is to give cards to players of a game.

Even though "deal" and "dealer" have similar spellings - a fact that is owed to the derivation process that formed the word "dealer" by adding the suffix "-er" to the word "deal" - they  have slightly different meanings according to the context in which they are used and, therefore, must not be confused.