This Grammar.com article is about Disinterested vs. Uninterested — enjoy your reading!

Alex brought her disinterested friend to solve the dispute between her and Adam who was uninterested in any such thing.

Does the above sentence gives you a about what is going on? Do you understand the characters of Alex’s friend and Adam as described in the above sentence? Well, if you don’t, there is nothing to worry about because we are here to help you.

Both the words come from early 17th century, the past participle of the rare verb sinterest ‘interest or concern’, from dis- (expressing removal) + interest or un + interest.

A banker is under an obligation to give disinterested advice.

Uninterested is also utilized as an adjective in English language and means a person or thing not interested in or concerned about something or someone. With synonyms like indifferent to, unconcerned about, uninvolved in/with, incurious about, apathetic towards, bored by, unmoved by and unresponsive to, uninterested is a bored person.

The girl was totally uninterested in the boy sitting next to her. 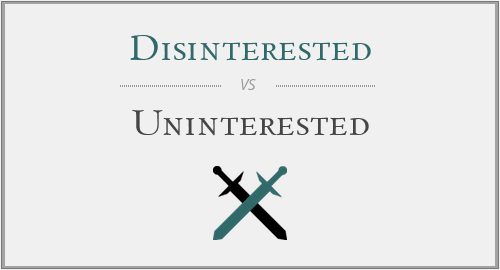 Tens of thousands of volunteers, many of whom had been disinterested for much of the year, turned up at campaign offices over the weekend. (Guardian)

Ask any teens about their parents’ jobs and you’re bound to get some shrugged shoulders and thoroughly disinterested looks. (NBC News)

Fox Sports is convinced it can convert those AFL and NRL fans disinterested in cricket to continue their subscriptions over summer. (The Age)

They are not uninterested in jobs and the economy, but they give the biggest cheers for same-sex marriage and ”don’t ask don’t tell”. (Sydney Morning Herald)

[His] numerous and mighty benefactions are seldom used to support an image of him as a model of disinterested philanthropy. (New York Times)

A scholar should read all the perspectives with as much detailed knowledge as can be mustered … and make every attempt to be disinterested. (Sinning in the Hebrew Bible, Alan F. Segal (2012))

The Wall Street Journal reports that a whopping 59% of female respondents aged 16 to 19 said they were uninterested in or averse to sex. (Huffington Post)

Read the sentence at the beginning of the article once again. Does it make sense this time? It must otherwise you are just another uninterested reader.