This Grammar.com article is about Disorganized vs. Unorganized — enjoy your reading!

Alright, so we have two words referring to the same property, of "not being organized": "disorganized" and "unorganized". It is, therefore, a normal thing to ask yourself whether one of these words is wrong, whether they don't mean the same thing or if you are using them the wrong way.

Let's make sure you'll never be confused again by this situation after reading the short explanation below:

The essence of the words is the same. They both refer, no doubts, to something that is not organized at the moment of speaking. So what makes them different and why do we need two words to express the same situation?

The key to understanding when to use the right prefix is actually a more subtle aspect, referring to how that thing became "not organized". Was it always like this or has it been organized before, but that thing changed? Let's take a closer look to this!

When do we use "disorganized"?

"Disorganized" is the word indicating that something is not organized anymore, but it has been once. The prefix "dis-" of this adjective is the one that indicates a change of situation, the fact that not being organized in the present is actually a result which has a cause in the past.

Example: I used to keep my room clean, but since Goofy, my puppy, started living with me, it is so disorganized!

When do we use "unorganized?"

"Unorganized" is used to express the other situation. More exactly, the prefix "un-" indicates that the current situation is not a result, but a constant state/property, of something to "not be organized". "Unorganized", therefore, refers to something that is currently not organized and which has never been.
Example: She has an unorganized garden, as she has respected no rule when planting the flowers.

Even though both "disorganized" and "unorganized" refer to the same situation in the present, the subtle difference between them is represented by how the current situation became "not organized", whether it is a result or it has always been like this. Remembering this difference will be enough to help you identify how to correctly use these two similar adjectives. 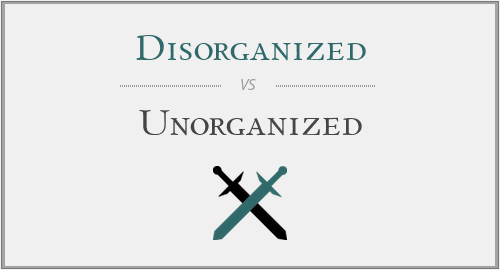