English is a language of many similar looking, similar sounding words that are different in their meanings. One such pair is convoy-envoy. Let us discuss about the meanings and usage of these 2 words in this Grammar.com article.

Both convoy and envoy are nouns. Convoy can be used as a verb too, as we will see later in the article.

Envoy is derived from the old French word ‘en voie’ meaning ‘on the way’. It refers to a person who is a representative of a country, especially one on a diplomatic mission from one country to another. Special envoys are persons sent to a country for a specific issue. Envoy is ranked below an ambassador. Examples –

·    The government sent its envoy to talk about the land deal.

·    The envoy spoke well about his country’s achievements during the conference.

·    He negotiates well, as a result the government chose him as an envoy for the mission.

Don’t mistake envoy for envy, envy means to be jealous of someone!

Convoy is a group of vehicles (particularly ships) that travel together for safety, accompanied by armed support. The word convoy can be used in non-military contexts too.

Convoy as a verb means to accompany a group of vehicles mainly for protection.

·    A convoy of trucks with food and other supplies was sent to the flood affected areas for immediate relief.

·    I could see the military convoys from a distance.

·    We got the necessary permissions to move our convoys tonight. 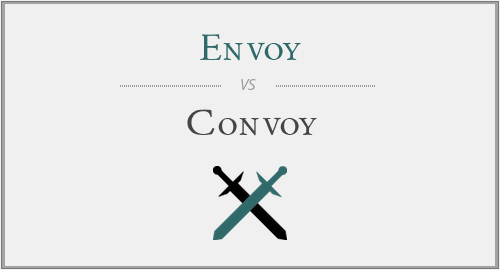 ·    The policemen convoyed the trucks till the border.

·    The traffic was being convoyed by the police because of heavy snowfall last night.

A few points worth noting from the above examples –

1.       Convoy itself is referred for a group. Convoys, the plural indicates many such groups.

2.       A vehicle that is convoyed is a vehicle protected by support (like armed troops, helicopters, warships)

Convoy can be confused with a common word ‘convey’ which means to pass on some information.

Phrase – in convoy – means in a group or together. Example – I saw a few army vans moving in convoy yesterday morning.

in many news articles, you might have seen the words envoy and convoy being used together. Both are formal words and used in the context of country and its security. Some examples that are picked up from various news items on the web –

·    The US envoy condemned the terrorist attack on a convoy of about 2500 personnel travelling from Jammu to Srinagar.