This Grammar.com article is about Exceed vs. Accede — enjoy your reading!

Their loyalty exceeds their national bonds.

He acceded to the throne after his father.

Do you know the difference between exceed and accede? Do the above sentences give an idea to what they might mean?

Exceed and accede are a pair of words with similar sound but different spellings and meanings. The pair of words is a source of continuous confusion among young writers and learners when they can’t decide what should be in their sentence. This article will explain the meanings, usage, difference and origins of both the words along with appropriate examples.

Exceed is used as a verb which means to be greater in number or size than (a quantity, number, or other measurable thing).

Exceed also means to go beyond what is allowed or stipulated by (a set limit).

The Tribunal's decision clearly exceeds its powers under the statute.

Exceed also implies the meaning of being better than or surpass from someone or something. 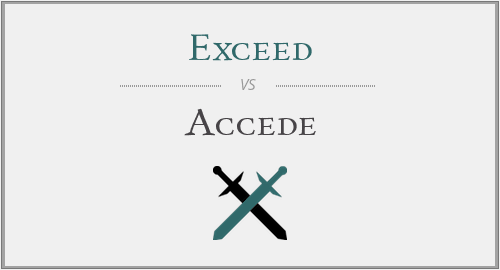 Accede is used as a verb in English language where it means to agree to a demand, request, or treaty.

The authorities did not accede to the strikers' demands.

Assuming an office or position is also called accede.

Elizabeth I acceded to the throne in 1558.

The cost of cleaning up an abandoned uranium mine in northern Saskatchewan is expected to exceed $250 million, more than 10 times the original estimate – and the provincial and federal governments are divided on how the burden will be shared. (The Star-Phoenix)

Forty companies are said to have received notices and the total tax demand could exceed Rs 4,000 crore, according to estimates. (The Economic Times)

The passenger train operator will start on Thursday charging $20 to passengers who exceed limits for carry-on and personal items. (The Denver Post)

He also said that Jammu and Kashmir did not accede to India which is intolerant. (The Siasat Daily)

While the U.S., the U.N. and the rest of the Quartet on Palestine acceded to the Israeli demand not to come to Jerusalem and the occupied territories, the Israeli political leadership continues to accuse Palestinian leaders while the Israeli army contradicts the political branch and insists that the Ramallah-based leadership is not involved in encouraging the current attacks. (The World Post)

By Friday morning, Trump announced via Twitter that CNBC had acceded to the flamboyant businessman’s demand that the debate be capped at two hours. (The Washington Post)

Exceed means to be larger or greater in quantity, to go beyond a limit. Accede means to take on the duties of an office, to agree to, to be a party to a treaty, to give in to demands. You should never exceed the speed limit on roads and you should appreciate if your boss accedes to your request of leaning early.