This Grammar.com article is about Farther vs. Further — enjoy your reading!

At some point, “farther” and “further” do mean the same thing. Or, more exactly, you can use whichever you prefer, in a certain context. And this is also the point where all confusions and doubts start. “Farther” and “further” have the same meaning only in some situations, not all the time. One can be used with multiple meanings, while the other can only refer to one aspect. So while you can use “farther” instead or “further” and vice versa in a certain case, you might actually create a misspelling if you do the same in another situation.

So, when do “farther” and “further” mean the same thing, and when do they have distinct significations? This is what we’ll discuss in this article and what we’ll illustrate through examples so you understand when it’s ok and when it’s not to use these words.

Another reason why these words are frequently confused by English users is that they are derivates from the same word: “far”. Both of them function as adjectives or adverbs, in their comparative forms of the word “far”.

Now, we all know what “far” means. But according to the spelling of the comparative form, “farther” or “further”, that meaning changes a little bit. And this requires certain contexts for each word to be used correctly, in order to avoid misspellings or confusions. You can check these below.

When do we use “farther”?

“Farther” is probably the more logical comparative of “far”, as it keeps the initial adverb and adds a suffix after it. To remember its meaning, you can associate this “more logical” characteristic with the “simpler to remember” as well. What is more logical is also easier to remember. The explanation, therefore, for “farther”, is as simple as it can be: it refers to something that is more distance, something that is placed more far away. To keep it short, “farther” is used when referring to distance only; to a larger/longer distance.

Example: I couldn’t walk any farther, I was very tired. – “farther” is used when referring to something more distant.

When do we use “further”?

“Further” is a little different from “far”, even though it’s also a comparative of it, and the explanation for it is also a little more complex. Firstly, “further” can also be used with the exact same meaning as “farther”, which would be “more distant”. But secondly, this word can also be a synonym for “more”, “extra” or “additional”.

Example 1: I couldn’t walk any further, I was very tired. – “further” is used when referring to distance, to something more distant, exactly like “farther”.

Example 2: I’m not discussing this matter with you any further, I’ve had enough. – unlike “farther”, “further” can also be used with the meaning of “more” or “anymore”.

When you refer to something placed at a longer distance, or something more distant, you can use both spellings, “further” and “farther”, choosing which word you prefer more. It’s only your personal choice. But when using it as a synonym for “extra” or “more”, you can only use “further” and not “farther”. Keep these short conclusions in mind and that will be enough to avoid misspelling or confusing “farther” and “further” ever again! 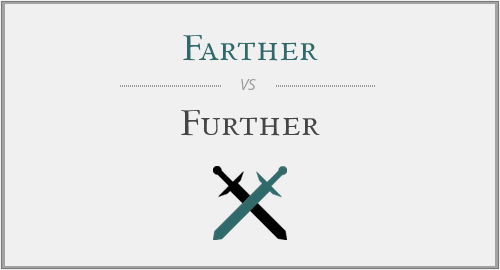