This Grammar.com article is about Further vs. Farther — enjoy your reading!

The red car is farther away than the blue car.

Contrary to popular opinion, further and farther don't have the same meaning. Basically, further refers to something that is additional and farther refers to actual distances between objects. Here are some easy-to-understand definitions and examples of how to use the two words.

This article will throw light on the meanings and differences between the two strikingly similar words so keep reading.

Further is used as an adverb to describe something that is at, to, or by a greater distance (used to indicate the extent to which one thing or person is or becomes distant from another).

For some time I had wanted to move further from London.

Further is also used to describe something over a greater expanse of space or time; for a longer way.

We had walked further than I realized.

Amelie decided to drive further up the coast.

Further can also be used as an adjective to describe something that is more distant in space than another item of the same kind.

Two men were standing at the further end of the clearing.

Additional to what already exists or has already taken place, been done, or been accounted for is also termed as further. 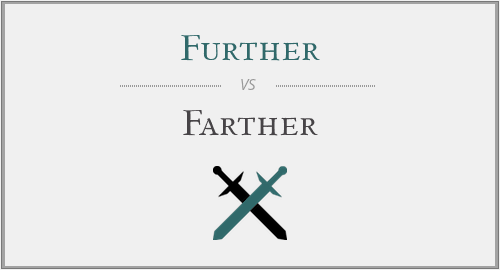 Cook for a further ten minutes.

Further is used as a verb as well in English language where it means to help the progress or development of (something) or to promote.

He had depended on using them to further his own career.

Farther is a comparative adverb of the word far which means at, to, or by a great distance (used to indicate the extent to which one thing is distant from another).

The house was not too far away.

Farther also sometimes refer to over a large expanse of space or time or by a great deal.

He is able to function far better than usual.

People use both further and farther to mean “more distant.” However, American English speakers favor farther for physical distances and further for figurative distances. The farther you go . . . the harder it is to return. The world has many edges and it’s easy to fall off.  You might ask for further information or pursue further education or you open yourself to further attacks of fear because you never truly fought the opponent who defeated you. Are further and farther impossible to tell apart from one another? No! Nothing could be further from the truth! If you remember that only further can mean “moreover,” you shouldn’t have much difficulty.

Are you further from the truth or farther?