This Grammar.com article is about Gaol vs. Jail — enjoy your reading!

As language evolves, some words drop out of common usage or change with the language. This could result in spelling changes, usage changes, or replacement with an entirely new word. This is a frequent occurrence for all modern languages, English included. That is the case with the word gaol, which was common in earlier centuries, but is used only rarely today. It was eclipsed by jail, which is the same word spelled a different way.

Are there any other differences between these two word variants? Continue reading to find the answer.

The word jail originated from Middle English: based on Latin cavea (see cage). The word came into English in two forms, jaiole from Old French and gayole from Anglo-Norman French gaole (surviving in the spelling gaol ), originally pronounced with a hard g, as in goat.

Jail is used as a noun which means a place for the confinement of people accused or convicted of a crime.

Jail is also used as a verb which means to put (someone) in jail.

The driver was jailed for two years.

Jail are the modern spellings for the place used for the confinement of the prisoners. 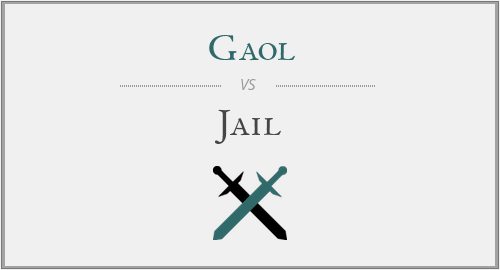 The city’s proposal to build a new jail near a wealthy suburb was met with fierce resistance.

“If you break the law, you will be sent to jail,” Andrea reminded her boyfriend.

After arresting the drunks for public indecency, law enforcement officials jailed them overnight.

The elder Mr. Lee was convicted of bribery and tax evasion twice but never spent a day in jail. –The New York Times

Gaol is an alternate spelling of jail, and it means the same thing. Historically, gaol was predominant in British English until roughly 1935, at which point jail became the more popular option.

But a donation drive at Crumlin Road Gaol has collected the real blood of 200 local TV and film extras. –BBC News

Jail and gaol and two spelling variants of a word that can be a noun or a verb. As a noun, it means a place to house criminals, and as a verb, it means to incarcerate someone. Jail is the modern spelling. Gaol is an outdated spelling that is rarely used. Both forms have been used over the past few centuries, but today, only jail is commonplace. Since gaol has an O in it, like the words old and outdated, you can use the word’s spelling as a reminder that it is no longer current.