This Grammar.com article is about Gist vs. Jist — enjoy your reading!

Some people tend to write down and spell a word just as they hear it, without thinking twice. Not knowing the right spelling beforehand can easily result in writing it wrong and creating confusion for other people, who will be wondering whether it is or it is not correct.

"Gist" and "jist" make a great example for this situation. They sound the same, but one is just the misspelling of the other, caused by their phonetic similarity. Find out which one is wrong and which one is the official form, so you always use it correctly.

"Gist" is a noun. The "gist" of something refers to the quintessence, the main point of something or its essential meaning regardless of the details. "Jist", on the other hand, is nothing more but a misspelling of "gist". It might sound the same, but don't get tricked by this. "Jist" does not exist in any official dictionary and will always be considered spelled wrong.

You can use "gist" whenever you refer to the core, to the essential point of a discussion, a text, a conversation, a publication or something else, without any details.

Example: The gist of his speech could be resumed to the promotion of acceptance and forgiveness. - "gist" is used as a noun to express essential elements, separated from useless details.

Never use "jist" if you want to spell correctly, especially in a formal letter or other form of official communication. "Jist" is misspelled and reflects little grammatical knowledge. It is not considered correct or elegant in any context.

There should be no confusion between these words, because in the end we only have one correct and existent word. "Gist" is a noun defined as the middle, main point, of something. "Jist" is a misspelling and you can completely delete it from your vocabulary. 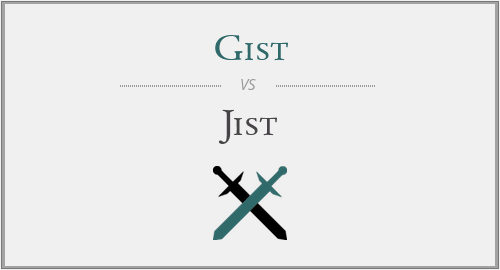