Last, the superlative form of late (the other one being latest) has been derived from the old English word “latost”. In some situations, we cannot use latest as the superlative degree of late, instead we use last.

Last (adjective) indicates the end point of anything. It can be a person, position, moment, occasion and so on.

Last as an adverb means previous (in a way final) –

Last as a verb indicates the longevity or time period of something. For example –

“Lastly” is used as a concluding statement or last point of something for a speech or write up. For example – 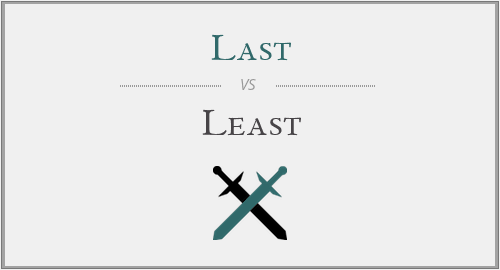 ·         Lastly, there is no evidence of a direct relationship between both, so we can’t take any decision.

Least is the superlative degree of little, which means less than everything else. So, you say little, lesser and then least! Examples –

Sometimes, we say Last but not least! Here comes the difference between both! Last but not least is referred in situations wherever we are talking about multiple points or persons and the last is as important as first (it is no less than others). This means even though the point is being mentioned in the end, it is as significant as all the others including the first one.

·         Last but not the least, I would like to thank all the staff who supported me throughout this task.

·         Last but not the least, don’t forget to share and like our videos if you are enjoying them!