This Grammar.com article is about Lend vs. Loan — enjoy your reading!

English has many words that refer to the borrowing of goods and money. Two of the most common words that apply to this context are loan and lend. Do they mean the same thing? Or, are there specific circumstances in which one or the other is more appropriate? If you are applying for a loan from the bank, you will want to ensure that your writing is impeccably professional. Proper word choice is an important part of formal writing.

Continue reading for an explanation of the differences between these two words.

The word lend originated from Old English lǣnan, of Germanic origin; related to Dutch lenen, also to loan1. The addition of the final -d in late Middle English was due to association with verbs such as bend and send. The word loan originated from Middle English (also denoting a gift from a superior): from Old Norse lán, of Germanic origin; related to Dutch leen, German Lehn, also to lend.

Lend is used as a verb in English language where it means grant to (someone) the use of (something) on the understanding that it will be returned.

Stewart asked me to lend him my car.

To allow (a person or organization) the use of (a sum of money) under an agreement to pay it back later, typically with interest is also called lend.

No one would lend him the money.

To contribute or add (a quality) to is another meaning of lend.

The smile lent his face a boyish charm.

Lend also means to accommodate or adapt oneself to.

John stiffly lent himself to her aromatic embraces.

Loan is used as a 3rd person present of lend which means lend (a sum of money or item of property). 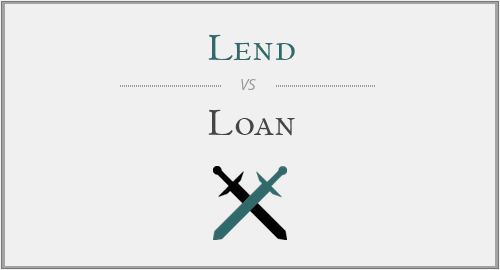 The computer was loaned to us by the theatre.

Loan is used as a noun in English language which means lend (a sum of money or item of property).

The computer was loaned to us by the theatre.

A lane or narrow path, especially one leading to open ground is also called a loan

The 29 year-old has suffered a high-profile gambling addiction and was loaned £250,000 by the club. [Telegraph]

The museum displayed it until 1950 and then loaned it to other museums until 1970, when it was returned. [Newsday]

The proposal was also intended to strengthen the rescue fund by allowing it to lend all its 440 billion euros, and perhaps use the money more flexibly. [Reuters]

Mortgage lenders are slashing the amount they lend to couples with children and older borrowers over the age of 55 are having trouble too. [Sydney Morning Herald]

Is it lend or loan? Lend and loan refer to similar concepts, but they are different parts of speech. Lend is a verb and loan is a noun. Although loan sometimes appears as a verb, too, this usage is not yet fully accepted. In formal writing, you should use loan only as a noun. Since lend and verb are both spelled with the letter E, and loan and noun are both spelled with the letter O, you should have no trouble remember when to use each of these words. Remember, despite common mistakes, these words are not interchangeable.