This Grammar.com article is about Lighted vs. Lit — enjoy your reading!

Sometimes, it might be difficult to identify in which cases we should use a word and which cases require the use of another, yet very similar one. "Lighted" and "Lit" are two words in this situation, which can be easily confused.

Read this quick and easy explanation to understand when and where you should use "lighted" and "lit" correctly.

The difference between them, though, is how they are used in the sentence, as they can work both as a verb and as an adjective.

When do we use "lighted"?

Obtained by adding "-ed" at the end of the present form of the verb "to light", "lighted" is the regular past-tense form and can be used both as a verb and as an adjective correctly. According to how the sentence sounds to you, you can choose to use "lighted" anytime, without worrying you might be wrong.

Lit is considered to be the irregular form of the past-tense for the verb "to light" and is mostly used as a verb, rather than as an adjective. Even so, it is not wrong to use it as an adjective as well. So you should only count on your instinct if you should or should not use this form of the verb, with no doubt that you could be wrong.

When and in which context you use "lighted" or "lit" is completely up to you. There are no statistics to show whether a version is preferred for another in certain cases, regions or in American/British English. It is only a matter of choice and the only thing you should remember is that neither "lighted", nor "lit" will ever be considered grammatically wrong in your expressions. 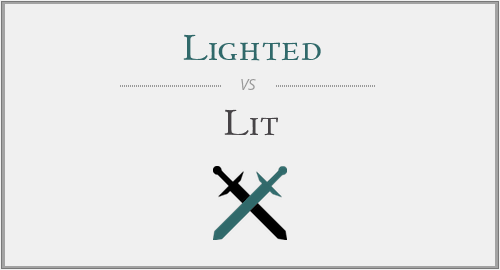