This Grammar.com article is about Lightening vs. Lightning — enjoy your reading!

Standing in front of the pair of words "lightening" and "lightning", you can start questioning whether spelling them differently is mandatory or not. Well, yes it is. It's not a choice, if you spell them differently or not, because their meanings are completely different according to the form you choose.

Even though they are both correct in the appropriate contexts, "lightening" and "lightning" can easily be misspelled if they are confused for the other. So let's make a quick review of what each word means in order to make sure you always use them right.

It is understandable why confusing "lightening" for "lightning" is an often error in English grammar. After all, they are spelled so similarly you might start to think that they mean the same. But they don't. The major and main difference between them is that "lightening" is a verb and "lightning" is a noun.

The easiest way to remember the difference is to know the source of the words. "Lightning" comes from the noun "light", whether "lightening" doesn't derive directly from "light", but from the verb "to lighten", which refers to the way a matter becomes less serious, or the amount of work/worries etc. is reduced. You can see more about using "lightening" right in the paragraphs below. What you should remember from now on, anyway, is that "lightening" is always the present participle form of the verb "to lighten", while the noun "lightning" derives directly from the noun "light".

When do we use "lightening"?

"Lightening" is used with the same meaning of the verb from which it originates, "lighten", in the present participle form. It refers to reducing the gravity of a problem, the amount of work for an employee for example, or someone's burden. As a secondary meaning, "lightening" is also used to define a shade getting less dark. Check the examples below for further clarification:

Example 1: Her mood lightening was impressive, when she found out nothing bad happened to her brother. - referring to the reduction of a burden, of worries.

Example 2: The lightening of my tasks in the office significantly reduced the effects I felt because of stress and anxiety. - "lightening" refers to reducing the amount of work someone has to do.

Example 3: The sun lightening her hair made it difficult to distinguish whether she had blonde or grey hair. - "lightening" can also refer to making something less dark.

When do we use "lightning"?

This one is easy to remember. "Lightning" is always only used as a noun and it has a unique definition. The word refers to the flash of light that appears out of a sudden on the sky before or during a storm.
Example: There was a lightning on the sky only few seconds before we could hear the thunders.

There is a notable difference between "lightening" and "lightning", which makes it inacceptable to misspell or confuse these words. Remember "lightening" is always a verb and "lightning" a noun, and you won't have any problem with choosing the right form in the future. 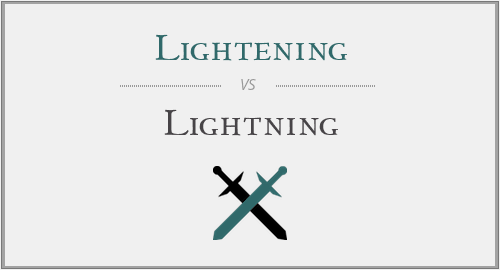