This Grammar.com article is about Maneuver vs. Manoeuvre — enjoy your reading!

Maneuver and manoeuvre are among the list of those words which have more than one spellings and which are a cause of a lot of confusion among young English writers. The word itself is a long, uncommon and complicated which further increases the chance of misspelling or misusing it in a sentence.

This article covers everything about maneuver from its origin to its different spellings, where they are used and why such a difference in spellings exist. Keep reading and we promise you won’t make a mistake next time you have to use maneuver in your English essay.

The word maneuver originated in mid-18th century (as a noun in the sense ‘tactical movement’): from French manœuvre (noun), manœuvrer (verb), from medieval Latin manuoperare from Latin manus ‘hand’ + operari ‘to work’.

Maneuver is used in English language as a noun where it means a movement or a series of moves requiring skill and care.

A carefully planned or cunning scheme or action is also called a maneuver.

His shady financial maneuvers are the reason no one trusts him.

Maneuver is also the fact or process of taking carefully planned or cunning action.

A large-scale military exercise of troops, warships, and other forces is also referred to as maneuver.

The Russian vessel was on maneuvers. 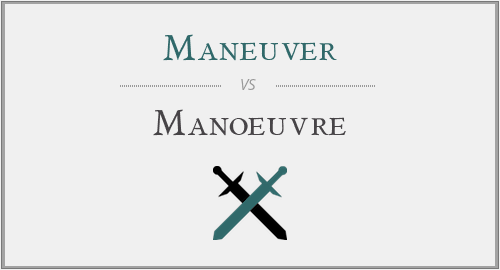 Maneuver is also used as a verb in English language where it means to move skilfully or carefully.

The lorry was unable to maneuver comfortably in the narrow street.

They were maneuvering him into betraying his friend.

Maneuver and manoeuvre are both different spellings of the same word. They are both acceptable and exchangeable in English language. A few scattered examples of maneuver can be found from as long ago as the 18th century, before the development of American English as we know it, but manoeuvre prevailed by a large margin until the early 20th century. In American English, maneuver is the standard spelling of the word referring to (among other things) a controlled change in movement or direction. Manoeuvre is the preferred spelling throughout the rest of the English-speaking world. Maneuver and manoeuvre are pronounced the same, and they share all their definitions.

The flag requires 50 adults—or very strong teenagers—to maneuver the poles of the flag and hold them steady for the parade. [Chicago Sun-Times]

Then he opened the door, nimbly maneuvered his 6-foot-5 frame over his belted-in son and settled into the bucket seat between his children. [Wall Street Journal]

Mr. Chiluba cycled through vice presidents and cabinet members he suspected of maneuvering to take his power. [Washington Post]