Maybe vs. May be

This Grammar.com article is about Maybe vs. May be — enjoy your reading!

English language has a lot of compound words that refer to two completely different words being joined together to give a meaning that is usually different or same from the original meaning of the two words. These words include; goodbye, passport, popcorn and maybe. Maybe when written with a space no longer remains a compound word and becomes a verb phrase but the question remains, does ‘maybe’ and ‘may be’ refer to different things or are they the same?

With the help of this article, I will illustrate the difference between the both, highlighting their contextual meanings. At end, I would explain a useful trick to help you utilize maybe and may be accurately in your writing instantly.

The compound maybe originated from late Middle English: from the phrase it may be (that).

The word maybe is used as an adverb in English language where it means perhaps or possibly.

Maybe I won't go back.

The word maybe is also used as a noun in English language sometimes which means a mere possibility or probability.

No ifs, buts, or maybes.

May be as verb phrase:

May be is not an adverb but rather a verb phrase with ‘may’ and ‘be’ both being verbs. Together they refer to probability of something occurring or something that might already exist.

They may be stuck in the elevator for a while.

Maybe someday we can go for skiing in France.

Maybe he didn’t text because he was feeling ill.

Allison broke up with him because maybe she realized they both weren’t meant for each other.

Maybe no one will go to the police to report the crime.

This concert may be the last one from the band One Direction.

Maybe or may be:

Even though the two words contain the same alphabets, the space between those alphabets makes the entire difference as maybe is an adverb while may be is a verb phrase. Their definitions are different due to the two syllables separation and one cannot be used in the place of the other as maybe is possibility and may be is to refer to something that has a chance of occurring. Remember the spaced word are two verbs and cannot be used as an adverb and hence, maybe can’t act as a verb in a sentence. 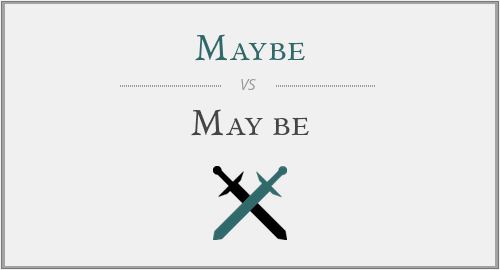