This Grammar.com article is about Naught vs. Nought — enjoy your reading!

The source of some of the most confusing spelling differences in English can be placed in the evolution of the English vocabulary during the last decades. American English and British English vary a lot in pronunciation and, therefore, spelling of the same words often differs through only one or two letters. A great example to illustrate the differences created this way is the pair of words "naught" and "nought".

Generally referring to the same thing, they are still used in different contexts. So let's explain them properly so you understand when you should use "naught" and when "nought" is recommended.

The definition and explanation for the word "naught" are simple. "Naught" is a pronoun mainly used in the US and it can be replaced with "nothing". It is an old-fashioned word, rarely used even in the US. As a result, you will almost never find it spelled like this in the UK.

"Nought", on the other hand, carries the same meaning as "naught" as a pronoun, but it is mainly used in the UK. It is also old-fashioned, so it is rarely used even in the UK and almost never in American English. But in addition to this sense, "nought" is also synonym with "zero" in British English and can replace it in certain contexts.

When do we use "naught"?

Because it's an old-fashioned word, you almost never use "naught" nowadays. In the contemporary vocabulary, "nothing" is much more frequently used. But when you do use it, make sure you spell it like this only if you communicate in American English. That's where it will be welcomed.

Example: I am just an ordinary person, naught more. - "naught" replaces "nothing" here.

When do we use "nought"?

Again, you almost never use it nowadays because it's an old-fashioned word and we have other modern nouns and pronouns for it today. But when you do use it, it will best fit in British English, whether you refer to "nothing" or to "zero".

Example 1: That man was nought before starting to work in your company. - "nought" can be replaced by "nothing".

Both "naught" and "nought" are correct and old-fashioned, rarely used nowadays in English. But while "naught" is mainly used in the UK, "nought" is the spelling preferred in the US. 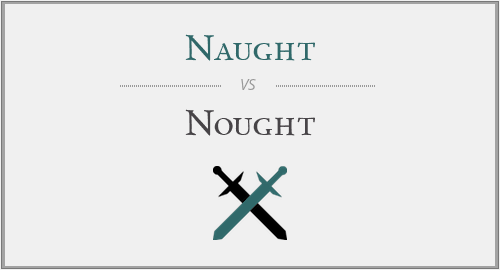