In this Grammar.com article you will learn the differences between Neighbor and Neighbour.

Consider this sentence for a moment. Does the word neighbors make you think again that maybe the spellings of neighbor aren’t really like these? Maybe there’s a u in it as well? If you are confused about the spellings of neighbors then we don’t blame you for it for it is not your fault. There exist two neighbors, (not literally but spelling wise) one without a u and one with a u in it. Now does the above sentence carries the right neighbor or wrong? We’ll see that in a minute because first we need to discuss the literal meaning of neighbor.

Neighbor is a person living very near (mostly next door) to the speaker or the person who is referred to in a sentence. Our neighbors hosted a party last night. A person or place that is there in relation to others next to it. She chatted with her neighbor on the flight to Chicago. A person who is in desperate need of your help or kindness is also regarded as your neighbor.

“Love thy neighbour as thy self.”

The bakery neighbors my block.

Now you know about your neighbor, let’s get to the crucial part of which neighbor is right and which is not. First of all you need to know that both of the neighbor are right as both spellings are accepted in English language. The difference in the spellings exist because of a major historical event; The Great War. When Americans gained independence from British, they wanted to be regarded as a separate country (different from British) for which they had to change many things like architecture and spellings. They wanted to create new spellings so they don’t have to adopt the spellings of their war enemies. The main credit for the job goes to Noah Webster, a famous American lexicographer, who wrote a dictionary in 1828 named, “An American Dictionary of the English Language.” Most of the words that are spelled differently today in American and British communities were written by Webster in his dictionary. Neighbor is just one of these words. 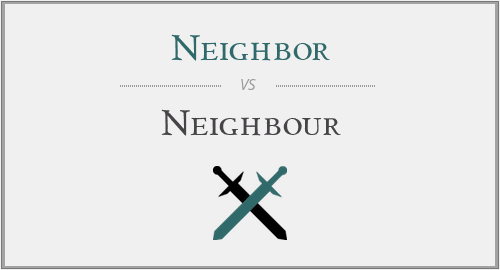 The American Revolution chopped off a u from the original word and resulted in a shorter version which is neighbor. The people living in America and addressing American population in their writings must use these spellings without a u in it.

The original word neighbour is spelled with a u after third vowel and is the preferred in all the English speaking world (except America) including Great Britain, Canada, Australia, Ireland and New Zealand etc. If you belong to any of these countries or your audience are from these countries you should probably use the original spellings with a u.

All the participles of neighbor can be written with or without the o so you don’t have to worry about that. Whenever you have to use the word neighbor in your writings, you should consider your location, audience and preference as the spellings differ in different regions. One thing to make sure is that whichever neighbor you choose in your writing, you have to stick to it in the whole piece, you can go shifting from one to another.

Do you have all the information about your neighbors now?