No One vs. Nobody

This Grammar.com article is about No One vs. Nobody — enjoy your reading!

In today’s world, with a rise in feminism, the application of basic masculine pronouns makes it difficult for writers to write without receiving criticism. That leads to the writers switching to the use of nobody and no one in their writings.

In this article, I will differentiate between nobody and no one by using them both in sentences with clear difference.

At end, I would share a method to help you remember how to accurately choose between the two words effectively.

No One as pronoun:

No one is used as a pronoun in English language where it means no person; not a single person.

No one came to her extravagant party.

No one can also be employed with an additional noun, where one describes singularity to the noun and no inverts it. This is something of a specialized usage, and could be considered ornate.

It was said that no one warrior could defeat him in hand to hand combat.

Nobody is also used as a pronoun which refers to no person; no one. It works as a singular pronoun in sentences.

Nobody was at home.

Nobody is also used as a noun in English which means a person of no importance or authority.

They went from nobodies to superstars.

Nobody is above being tested by the law, no matter how rich.
Nobody is intelligent enough to solve the quantum theorem.
Nobody here matches the description of the killer.


No one or nobody:

Nobody or no one both are generic pronouns that do not refer to any sex specifically. They have the same definition but ‘no one’ is mostly utilized in formal writing, for example: professional and academic language. However, they are singular pronouns that are yet to be identified and accepted as plural indefinite pronouns. 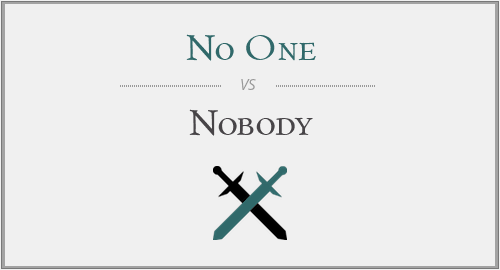