This Grammar.com article is about Offence vs. Offense — enjoy your reading!

The team had troubles with their offense because they key player was injured.

The offence was clearly much lighter than the punishment.

Do you know the difference between offence with a c and offense with an e? Can you figure out if the above sentences are correct? If you can’t, this article will be great help for you to understand the real difference between the two words so that next time you begin an essay for your English class, you don’t have to think twice before using this word.

Offense and offence are two spellings of the same word, and they are both acceptable and exchangeable depending on where you live, where you are from and who you are writing for. None of the spellings are wrong.

The word offense is used as a noun in English language where it means a breach of a law or rule; an illegal act.

The new offence of obtaining property by deception is implemented.

Offense also means a thing that constitutes a violation of what is judged to be right or natural.

The outcome of your plan is an offence to basic justice.

Annoyance or resentment brought about by a perceived insult to or disregard for oneself is also called an offense.

He made it clear he'd taken offence.

Offense is also used in a sense of the action of attacking someone or something. 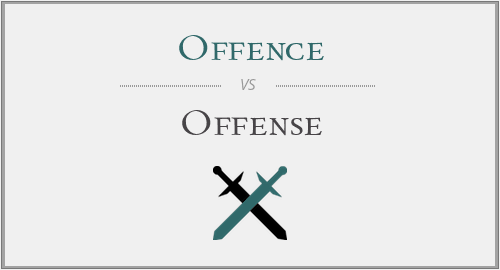 Reductions in strategic offence arsenals is a huge step forwards.

In North America, offense is also used to imply the attacking team or players in a sport, especially in American football.

He is a wide receiver, playing on offense.

Other than how they are spelled and where they are used, there is no difference between offence and offense. Offense is the preferred spelling in the United States, and offence prevails in all the main varieties of English from outside the U.S. The American spelling gained steam through the 19th century, after being promoted in Noah Webster’s 1831 dictionary and all later editions, but didn’t become the more common form in the U.S. until the early 20th century. The spelling was not invented in the U.S., however. Webster and his contemporaries, in forging what they viewed as a more logical and more American variety of the language, actually just revived an old spelling that had been appearing to varying degrees since the 14th century, long before the United States existed. The Oxford English Dictionary cites examples of offense from as long ago as 1395—and their earliest instances of offence are from just a decade earlier—though it is true that the modern British spelling was settled by the 17th century and that offense was no more than a rare variant by the time the Americans adopted it.

The veteran tight end never found a home in Mike Martz’s offense and was inactive for all but five games. [Chicago Sun-Times]

No offense to the many women who do far more gaming than I do, but I suspect that males were a not insignificant part of G4′s market. [Time]

If people take offense at hackneyed phrases it’s because they’re hackneyed. [The Atlantic]

Both offences can exploit some areas that play to their strengths. [CBC]

Parents who fail to keep air guns away from their children will be fined up to £1,000 under a new offence from next month. [Telegraph]