Override and overwrite are two common words that are often confused and used interchangeably. They are used by many programming languages as well. There is a small yet powerful difference between both, and in this Grammar.com article, we will explore the same.

Override can be used as a verb or noun. It means to cancel or reject a decision or view or interrupt action done by an automatic device manually. Examples:

•   In case of any emergency, you can override the functioning of this device by using the stop button.

•   Any objections can be overridden only by the court of law.

•   You can override the permissions on the document only if you are an admin.

•   Using the equipment without a manual override could be dangerous

Some synonyms of override are: overrule, nullify, cancel or quash. 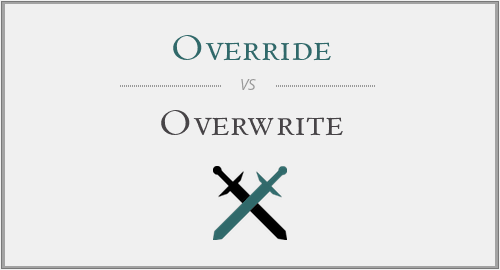 Overwriting something is to completely remove the old version and then add a new version. The previous version is then lost. For example, if you have a shared copy of a document, and write some content, but someone else accesses it, writes their content and commits the changes, then your changes will be overwritten or lost. It is similar to replacing content with another and mostly used in computing and data contexts. Example,

•   She overwrote the file by mistake. (Past tense of overwrite)

•   We should give only read permissions for new users so that they don’t accidentally overwrite the content.

•   See to it that the file is not overwritten when you commit the changes.

•   The previous version is not up to the mark; you can overwrite everything.

•   The boy was caught overwriting the important dialogues of the play.

In some contexts, overwrite also means writing too elaborately or with too many words. For example, “She overwrote the meaning of the poem; so, everyone got bored.”

“While you try to override the content with your implementation, make sure you don’t overwrite it completely!”