People vs. Peoples vs. Pupils

I have often heard some individuals say – peoples when they have to a group of persons. But is the usage correct? Is ‘peoples’ a valid English word? Let us find out in this Grammar.com article.

When we refer to a human being, we say a person. For example, a nice person, the last person to attend the conference and so on…

When there are many human beings or individuals, we refer to them as persons. Example,

Note that ‘persons’ is used in a very formal sense. In fact, most of the times in legal documents or contexts.

We often use people in place of persons to indicate a group of human beings. We can say,

The three or few human beings are collectively called as people. People is a general term used for a group of persons.

This means people is a plural word already.

So, what is peoples? 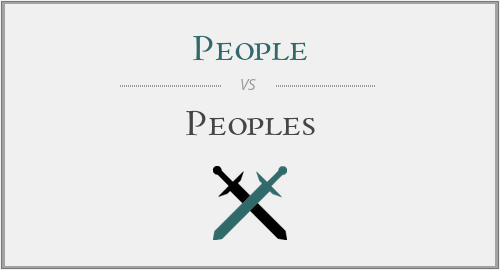 Peoples refers to members of a particular community, nation or ethnicity. This can be a race or a tribe. Example – the native peoples of India speak at least 2 different local dialects.

So, we can say peoples as a group of people that belong to a particular community and live in a certain region. Example –

Sometimes, we can get confused between the words ‘peoples’ and ‘pupils’.

Pupil (in the current context) is a student, a scholar or a person who learns from a teacher or another learned person. Pupils is the plural of pupil and refers to a group of students or scholars.

·         Our pupils are capable of making great scientific breakthroughs, with the infrastructure available in our premises.

·         The pupils were the library when the warden came for inspection.

Since people and pupil sound somewhat similar, they can be confused easily. Note that pupil is a singular noun, whereas people is plural. Pupil refers to only students while people is a general notation for any group of individuals.

Keep these tips in mind to always use the right word at the right time and place.