So and such are used in many contexts in English. They are popular words and sometimes used interchangeably. In this Grammar.com article, let us explore the possible uses of these 2 words with a lot of examples.

So is a conjunction. It can join two sentences.

In addition, you can use so with ‘that’ to indicate result of an action.

The water is very cold.

The water is colder than it was yesterday.

The water is/was so cold that I am/was unable to swim.

You see the difference? When we use so, we often also indicate the result of the verb that follows the ‘so’. A few more –

To indicate the amount of something, we use so with many, much, little or few.

You can use ‘so’ for a guess or approximation too.

Such is a determiner and pronoun, which tells a situation similar to previous one.

·         They have many outdoor activities like swimming, horse riding and such in the campus. 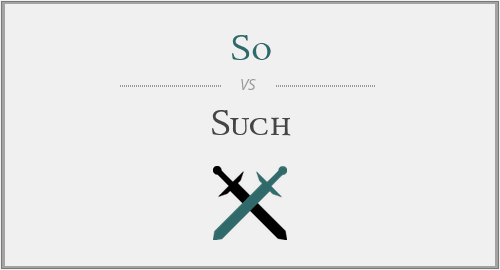 Such should be followed by a noun or adjective+noun combination. If you have singular noun, articles like an, the or a should be used. Examples –

·         Such a move will discourage people from throwing garbage on streets.

·         Such intelligent children should be sent for higher studies free of cost.

·         The impact should be such that people fear going there ever again.

As such – in the exact sense of the word.

Such as – For example

Such and such – substitute to refer to a person or thing

·         Such-and-such person needs to be present in the court on Monday morning.

Notice that in the above we can use so-and-so too!

The similarities between so and such –

Both so and such tell the degree or extent of something.

It was such an expensive restaurant.

The restaurant was so expensive.

There is no difference in the meanings of the sentences. Only the way of expression is different. By little tweaking in the structure, we can interchangeably use so and such.

How to determine which one to use?

It depends on the word you want to emphasize on!

In the above sentence, ‘it was’ is redundant.

However, it may not always be the case. Let us take one of the previous examples –

The impact should be such that people fear going there ever again.

The emphasis here is on the word impact.

We can say, “It should be so impactful that people fear going there ever again.”

Again, we do not want to know the ‘it’. All we care about is the impact.

Consider another one – We had such a lovely time at your party.

All in all, you will have to make your own judgement to decide which one to use based on emphasis and meaningfulness of the sentence. Just remember the syntax mentioned in the beginning of this article so that you can make grammatically right sentences.