Subjective is an adjective that means a report or statement submitted based on a person’s individual ideas and opinions. Subjective statements are usually lengthy and represent personal opinions rather than facts. Subjective ideas and statements can be wrong because they are not based on facts. They can be a result of pure imagination. For example,

•   The exam was subjective so your marks can totally depend on the examiner’s mood.

•   This is a highly subjective matter and we need to thoroughly think through it.

•   You cannot select students for scholarship based on your subjective judgement.

•   Your political views are highly subjective.

The word originated from the Latin word subject meaning brought under. Subjective is pronounced as sub-jek-tive.

Subjunctive is a grammar mood that expresses a hypothetical situation. It indicates something that should have happened but did not. For example,

•   If only I had left home on time, I wouldn’t have missed the train. 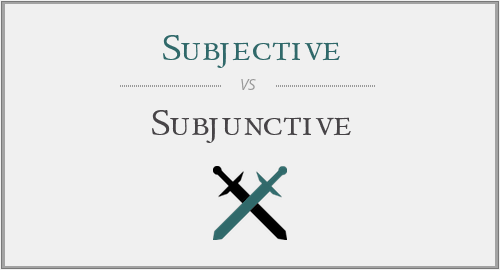 Subjunctive mood is also used to indicate something being demanded or suggested. Example,

•   The document states that he be present at 8am.

•   It is necessary that she bring all the documents tomorrow.

Note that we use ‘be’, ‘bring’ and not is or brings for third person. Subjunctive clauses are used in formal writing in the following situations:

•   With that: As we have seen above, for demand or suggestions, we use subjunctive mood with ‘that’. Example, “It was told that she wait until tomorrow.”

•   With ‘If I were: If I were you, I wouldn’t have taken up the job OR The sky became dark, as it were night!

The subjunctive is not very common in Spoken English.

We have understood that while subjunctive is a mood that describes a hypothetical situation, subjective is an adjective that is used to express one’s opinions. Both words are used in the context of “writing”, however are completely different from each other.