Talking and speaking are both important and much confused words. A lot has been written about the differences, but still there are some confusions during the usage. In this grammar article, let us discuss easy ways of remembering the difference between both and when to use each of the words.

“We can’t speak freely when someone is around”

“We can’t talk freely when someone is around”

Both sentences are correct and same in the meaning. The only difference is that speak is more formal than talk. For example, talking to a friend is casual while speaking with your students is more formal and informative.

Further, talking is more like striking a conversation (2 ways) while speaking comes from the noun speech, which often means relaying information.

·         I am going to speak to my teacher right away for a change of seat. (the matter is important and I need to inform this)

·         Can you speak a little about your family background? (a formal, workplace question)

·         Will you be able to speak a few lines about the company during the event? (no discussions, only one-sided talking)

·         Let’s talk about this matter when we meet tomorrow! (discussion, two-way conversation)

·         The opening speech will be given by our honourable Prime minister. (formal, the PM may not even know a lot of people in the audience)

Reference to languages – We use speak to refer to languages. It is correct to say “I speak English, Chinese and Korean.”, but not “I talk French.” Few more examples – “What language do you speak at home?”, “How many languages can you speak fluently?”, “I hope you can speak English.”

As we have seen earlier, a speech is when one person gives his opinions and the others are just listening. For example, “I spoke about the Darwin’s theory at the university today.” 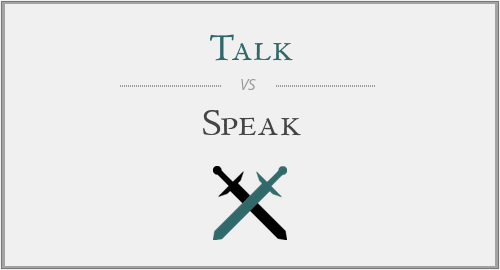 A talk is a less formal conversational way of expressing about a topic. “They invited me to the conference to talk about the benefits of afforestation.”

TED talk – We all have heard or seen TED talks at some point of time. While it involves a speaker who “speaks” on a particular topic, can you think of a reason why it is called as a talk and not a speech?

It could possibly be because TED began as a conference which essentially it was an initiative to bring together innovative ideas and spread them globally, which means it focuses on the speaker and is open for discussion.

‘Speak with’ is furthermore formal compared to ‘speak to’. Both of the below sentences are correct –

“May I speak with Dr. Elizabeth?”

Talk is always used before ‘to’. ‘Talk to’ is correct while ‘talk with’ is incorrect usage. Example - “Never talk to strangers.”

Common phrases with speak and talk

Speak up – to express your opinion about something

Speak volumes – something that tells a lot about the topic in hand.

Talk around – convincing someone to accept what you want

Talk back – respond in a rude way

Talk down – to consider something as less important

So next time, “don’t talk amongst yourselves when someone speaks about the importance of learning English!”