Though both these words seem similar, there is a subtle yet powerful difference between both. In this grammar article let’s learn the difference. Let us start with understanding the meaning of both words.

Evacuate (verb) is a stronger term which means emptying a space because of some emergency for safety purpose. Commonly, this word is used when there is a problem and a large number of people are being moved out of a place. For example –

·         The army men evacuated the people of the town because of the floods.

·         The children were quickly evacuated from the school because of sudden fire.

·         The evacuation was done in just half an hour and we were able to save everyone.

·         It is only intelligent to evacuate a place in case of emergencies than waiting for help.

Originally, the word is of Latin origin and meant ‘empty’ or void and was used in the context of removing (waste) from the body through bowels. Now, the word is used in a broader sense.

Vacate simply means leaving a place. It could be by choice or when someone asks a person to leave. For example – 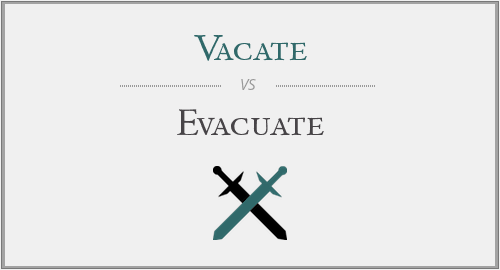 Vacation is generally used in the context of going somewhere for recreational purposes, however, it also means leaving something that was previously occupied. Being on vacation means one has left what they regularly do – for example, going to school or for work, for some time.

From the meanings of the words, we can understand how different these words are.

·         Two days after she vacated her flat, we had to evacuate people of the entire building because of a fire accident. (she emptied the flat at her will, but removing the other people was a necessity)

·         The authorities asked the illegal residents to vacate the land failing which they had to forcefully evacuate them to protect the land.