Many times we encounter situations where we fall short of correct words. For example, we know where to use was and were in general, but if we are to use them with specific phrases, it might get confusing. In this Grammar.com article, let us explore this concept with examples. 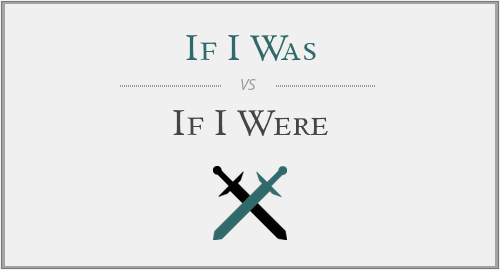 This is a situation that could have happened. That’s because it has an ‘if’ clause. If the situation has happened, the result will follow. For example –

As a general rule, use If I was + adjective + present tense (in the then clause). Each sentence above is true or real and the then clause has the result of the if clause. For example, if I wasn’t clear (which perhaps I wasn’t) – so I apologize. Same way, he probably is a ‘pain in the ass’ and hence we wouldn’t take him along. The third one is a question. We can as well say ‘If I was good, then select me’.

Use ‘if I was’ for real situations that are in indicative mood.

Used in a subjunctive mood, ‘if I were’ indicates an unreal situation. Something that can never happen. You are imagining a situation, that isn’t true yet or cannot be true.

Remember, these are hypothetical situations. In general, use If I were + noun + would

If I was present, I would have taken care of the situation. – X (wrong)

The correct sentence should be – if I had been there – because this is a hypothetical situation.

If I was present, I would take care of the situation. – X (wrong)

The situation was not taken care of, so clearly the statement is not true. Hence, we should use ‘were’ and not ‘was’.

If I were present, I would have taken care of the situation – X (wrong)

Again, with ‘were’, you should use would take care of and not participle form (have taken). As a general rule, use participle with participle.

If I were a boy, I would happily roam outside all night.

If I had been a boy, I would have happily roamed outside all night.

There are two differences in the above sentences –

“I saw all the boys chatting and enjoying themselves, starting at the moon from the stable. That’s when it struck me – If I had been a boy, I would have happily roamed outside all night too!”

Hope this article helped you understand the difference between if I was and if I were clearly. Try these exercises to figure it out –