As the second word, “seem”, is more commonplace in English, some assume that “seam” is the same word with an alternative spelling. Others are simply confused by the similar spellings of the two words. And others simply don’t notice the difference and keep using them incorrectly, without realizing.So, do you know the difference between “seam” and “seem”? And if you always write “seem” correctly, in the right context, do you have any idea what “seam” means? If your answer to any of these questions is no, then this article is for you! Find out what a “seam” is and what “seem” refers to, so you will always know the difference between them and use them correctly.

Secondly, their meanings are not even closely related. One means one thing, and the other refers to something completely different. Now, let’s get an in-depth insight into what each word actually means, and when and how to correctly use it.

Functioning always as a noun, a “seam” is defined as a line of sewing, where two pieces of material have been joined together with stiches. This is its main meaning; however, as a secondary meaning, “seam” may also define a long and thin layer of coal or gold under the ground.

Example 1: The seam on this skirt is handmade, that’s why it’s done so well. – “seam” defines a line of sewing where two pieces of cloth are joined together.

Example 2: The underground cave became a thick seam of coal. – “seam” can also refer to a thin layer of coal or gold under the ground. 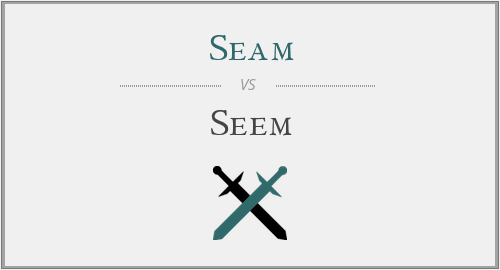 Unlike “seam”, “seem” always functions as a verb, and has a particular meaning synonymous with the word ‘appear’. When things “seem” to be in a certain way, they appear to be in a particular way or to have some particular qualities.

Example: These people seem to be very unhappy. – “seem” is used to express that something or someone appears to be in a particular way.

If you ever find yourself confusing “seam” with “seem”, then this article can help you clarify which is which and see that there is no way that these words can be synonyms or even related. Simply keep in mind that with no connection between their meanings, “seam” is a noun referring either to a sewing line or to a layer of coal, whereas “seem” is a verb used to express that something or somebody appears to be in a particular way.